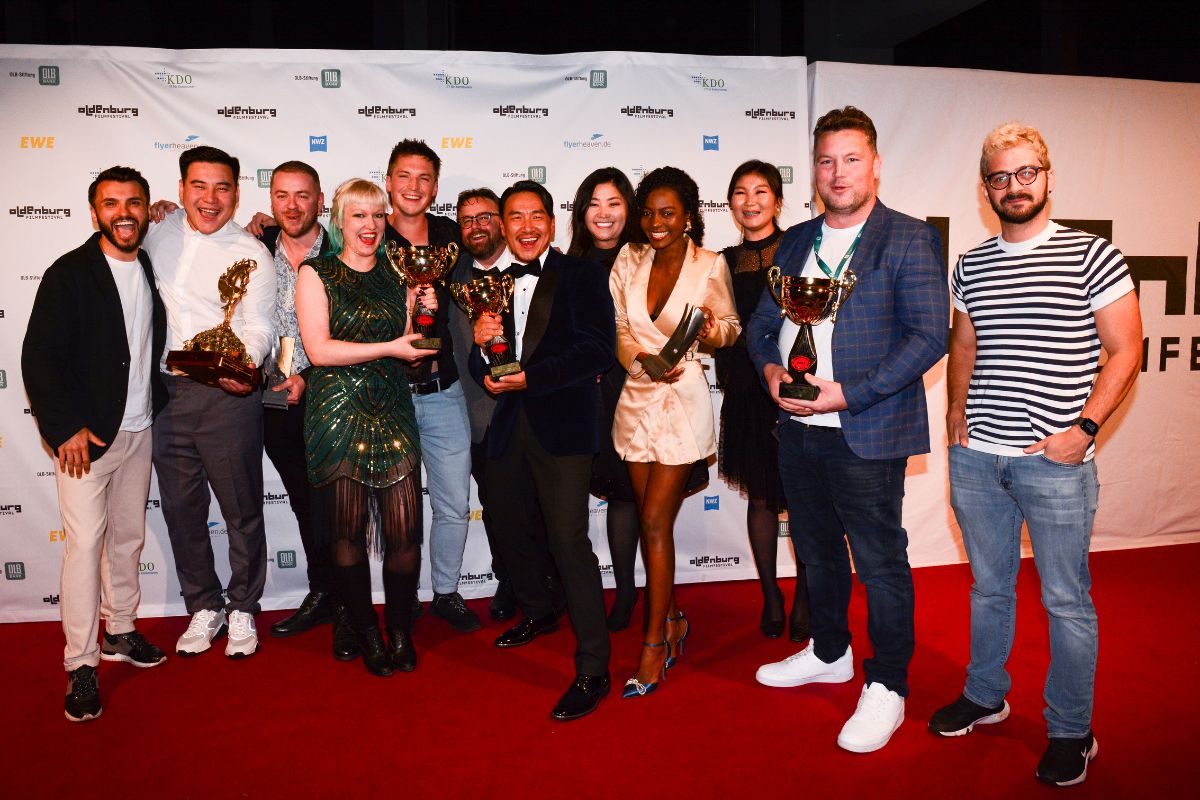 For five days, the international world of independent cinema was a guest at the 29th Oldenburg International Film Festival

Award winners of the 29th Oldenburg International Film Festival, Highlights of the festival and final report

The 29th edition of Filmfest Oldenburg started brilliantly in every aspect. On Wednesday, the festival opened with the German contribution »The Ordinaries«, by Sophie Linnenbaum, in the Congress Hall of the Weser-Ems-Hallen. Rarely does a film manage to combine imagination, originality, wit and intelligence as playfully as Sophie Linnenbaum does in her second directorial work.

On the Red Carpet, numerous star guests and hundreds of fans made for a euphoric start.

Not blockbuster and mainstream productions, but ambitious and risk-taking independent films once again made this year's Oldenburg International Film Festival, hailed as the »German Sundance«, a creative and lively place for all filmmakers present.

With an above-average number of World, International and German premieres, including »Subject 101« by Tom Bewilogua from Germany, »We Don't Dance for Nothing« by Stefanos Tai from Hong Kong, »Linoleum« by Colin West from the USA or »The City« by Katsuki Kuroyanagi from Japan, the festival once again turned out to be one of the most important platforms for the international independent cinema scene. For 29 years, the Oldenburg Film Festival has offered both renowned filmmakers and audiences the opportunity to discover the indie spirit of young directors.

This year's retrospective was dedicated to Peter Hyams and John Hyams. Peter Hyams, who can look back on a career spanning 40 years in Hollywood, often is not only the director of his films, but also the screenwriter and cinematographer at the same time. Like Peter, John Hyams is an »auteur« in the classic sense. A filmmaker who uses the material he works with to shift stagnant genre boundaries in remarkable ways.

A worldwide livestream featured a conversation about the retrospective with special guests Peter (live from Los Angeles) and John Hyams, shown live at Filmfest Oldenburg.

The tribute honoree is a woman who 50 years ago became an icon of the sexual revolution with an irresistible mix of nonchalance and eroticism in the films of Harry Kümel or Ulrich Schamoni: Andrea Rau.

The honors took place during the concert »Bernard Herrmann: Classics of Film Music« by the symphonic youth orchestra Siam Sinfonietta conducted by Maestro Somtow Sucharitkul at the Lambertikirche. A prominently cast panel on the state of German film criticism with Rüdiger Suchsland, RP Kahl and Prof. Dr. Marcus Stiglegger attracted much attention.

While the number of viewers increased by about 20% to a total of 9,000 in the festival cinemas, the Congress Hall of the Weser-Ems-Hallen, the Lambertikirche and the Oldenburg State Theater, a proportionally comparable decline in viewers was observed in the digital screenings. This trend is further evidence that audiences crave real-life culture and that the festival cannot be replaced by digital alternatives.

A diverse and artistically vibrant festival came to a festive end on Sunday with the Closing Night Gala at the Staatstheater Oldenburg, the closing film »Paradise Highway« by Anna Gutto and the announcement of the award winners.

The short film competition winner was a film about the psychology of love, self-perception, and self-worth. A tense story about wanting to be needed, no matter what the cost. Samuel Bereuther’s »Jockstrap Jesus« is a German relationship drama dressed up as a thriller or perhaps more likely a thriller dressed up as a relationship drama that has an intensity that can keep audiences hooked and questioning the characters’ true intentions from beginning to end.

The Jury also made a special mention to »The Sound of Dreaming«, a Nepalese work by Australian director Kalani Gacon, festival invited viewers to question the sound or the silence within dreams, internalized fears, and unsuspected desires: a story that portrays new forms of families, attempts of personal redemption, and of resistance or of political struggles that speak to us of the very fragile world we live in and how even when faced with the chance to grasp our dreams, reality rarely allows us to take hold.

The Seymour Cassel Award for Best Actor this year went to Cyndie Lundy for the lead role in »Parsley« and to Graham Earley in »The Black Guelph«.

The Advisory Board also honored the film »Aberrance« by Baatar Batsukh with the Audacity Award.

The Spirit of Cinema Award was given to the film »Brothers« by Darkhan Tulegenov.

An honorable mention went to the film »Our Father, The Devil« by Ellie Foumbi.

The top prize, the German Independence Award for the best film in the film festival's independent series, was won by »The Black Guelph« by John Connors.

THE AWARDS AT A GLANCE

Our Father, The Devil

The Sound of Dreaming

The 29th edition of the Oldenburg International Film Festival was a great success.

Pictures from the award ceremony are available in the download section of the film festival's website at https://filmfest-oldenburg.de/de/presse/pressematerial-events/

Material on the films mentioned can also be found on our website at: