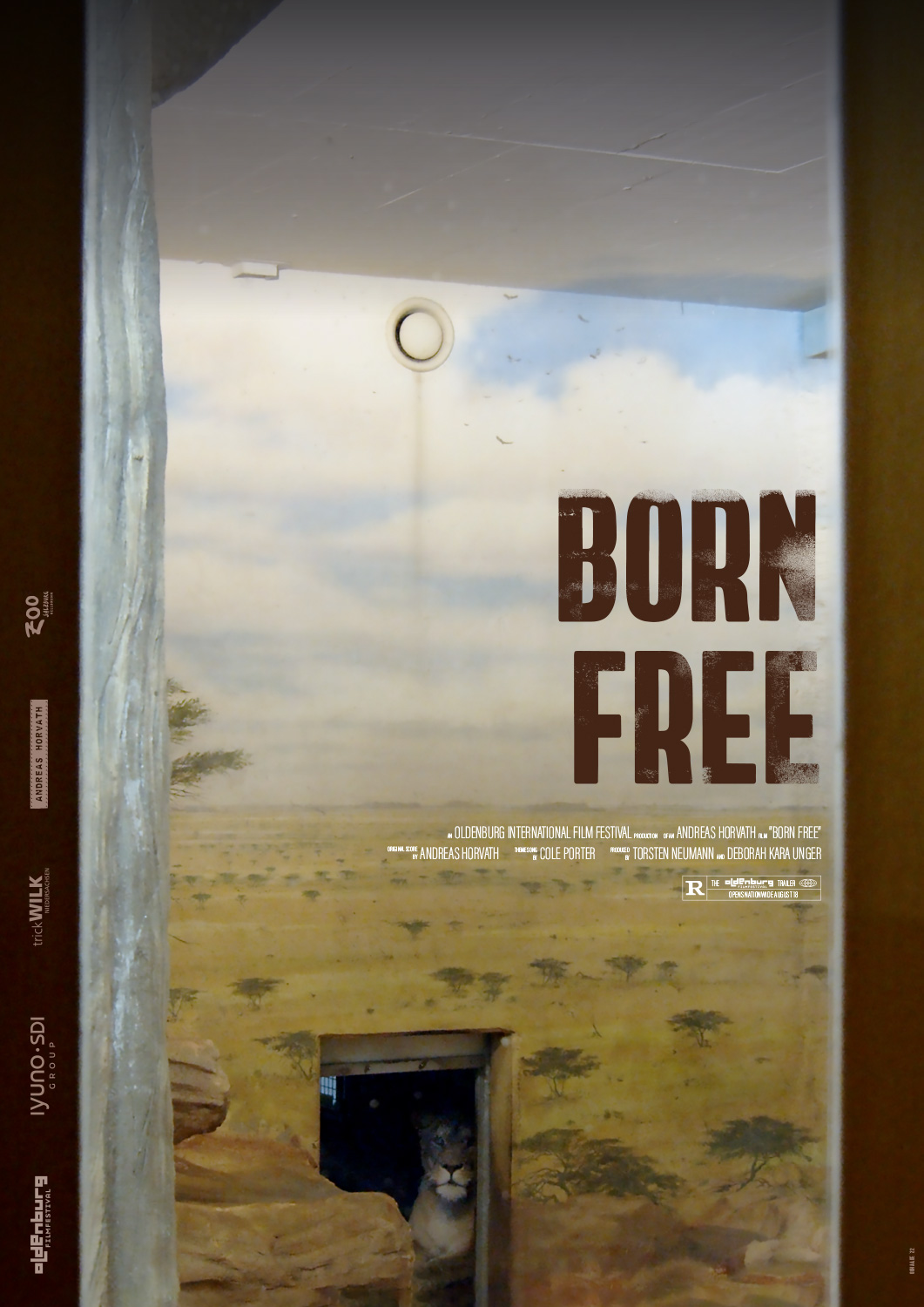 Festival Trailer is a Declaration on the Situation of Culture & Cinema, as Indie Debuts Dominate Oldenburg’s First Lineup Highlights

With the first lineup highlights announcement, the world premieres and debut features of exciting young filmmakers dominate the 29th Edition of the Oldenburg International Film Festival, and the Festival Trailer, which screens nationwide starting August 18, is a plea for a cultural landscape without restrictions

This year, the Festival collaborated with Award-winning Austrian filmmaker and composer, Andreas Horvath, to create the 2022 Trailer »Born Free«, by using footage from his latest film »Zoo Lockdown«, which had its world premiere in Karlovy Vary and will celebrate its German Premiere in Oldenburg. During lockdown, Horvath had the unique opportunity to film the animals in the Salzburg Zoo. Without visitors, the essence of their situation is purely observed, as is the realization that a life in captivity, a life without freedom, is always the most serious violation of an individual's being. Protection of the species loses much of its theoretical weight and justification in the face of the images Horvath captures. And for us, after more than two years of the pandemic, looking into the eyes of these beings is like looking in the mirror.

With this trailer, which will be screened in German Arthouse cinemas nationwide from Thursday on, the film festival wants to take a very clear position: the prospect of further lockdowns can no longer be accepted as a permanent solution to the ever-changing pandemic situation. Instead of continuing to jeopardize our cultural environment, we need very clear commitments to protect and be in favor of the cinemas and culture in general. The film festival stands for that.

Stills for the Trailer are available at https://filmfest-oldenburg.de/en/press/pressematerial-events/trailer-2/

Winner of Best Director at its 2022 World Premiere in Official Competition for the Palm d’Or in Cannes, Park Chan-Wook’s latest offering is the Official 2023 Oscar Entry from South Korea. Park’s neo-noir crime romance follows the serpentine emotional journey of a young detective investigating a man's death in the mountains. In his poignant and seductive thriller, the crime scene is forever tainted once he meets the young widow – and main suspect.

Inspired by true events, the latest offering from Cabral enters the heart of historic and genocidal times. 1937: A young pregnant woman, left alone in a jungle village in the temporary absence of her husband, is suddenly forced to flee in order to escape a massacre. The government has ordered the immediate execution of all Haitians on Dominican land, and the test of their true origins is their pronunciation of the word: PARSLEY (perejil). In an extraordinary performance, Cyndie Lundy embodies the protagonist Marie: a young woman awakened by screams. With a child inside her, ready to be born, Marie sets out in the middle of the night - determined to make it to neutral territory in order to keep hope for the future alive.

Wendo and Mugeni come from different tribes in Kenya. Both try to distance themselves from the politics of their families, but are drawn into the political maelstrom full of tribalism and intrigues in the course of an increasingly heated election campaign. A Kenyan Romeo and Juliet story set against the backdrop of the difficult process of encouraging democratic elections in a country that has lost faith in reason and justice within politics.

Like every summer, little Salomé returns to her family village nestled in the Portuguese Mountains for the holidays. It is the Portugal of the sun, the dances, the afternoons spent fishing in the river. But it is also the Portugal of spells, spirits and the dead. As the vacations begin in a carefree atmosphere, her beloved grandmother suddenly dies. While the adults are tearing each other apart over the funeral, Salomé is haunted by the spirit of the one who was considered a witch. Winner of 2019s Oldenburg Jury Prize for her Short Film »Invisible«, we are honoured to present her debut feature, following its World Premiere in Un Certain Regard in Cannes.

Award-winning Austrian filmmaker and composer, Andreas Horvath, had the unique opportunity to film the animals in the Salzburg Zoo during lockdown. Without visitors, the essence of their situation is purely observed, as is the realization that a life in captivity, a life without freedom, is always the most serious violation of an individual's being. Protection of the species loses much of its theoretical weight and justification in the face of the images Horvath captures. And for us, after more than two years of the pandemic, looking into the eyes of these beings is like looking in the mirror. »Zoo Lockdown« had its world premiere in Karlovy Vary.

In the Berlin of tomorrow, an inexplicable crack opens up and splits the city in two. Freedom is now underground. As is hope for the future. So when the obscure love source Billie suddenly ghosts her friend Marion, no path is too far for Marion to track her down. In the off-the-radar underground, she embarks on a journey with four fellow outsiders to find their missing friend and guru. But where does Billie's trail lead? In the feature debut of Juri Padel, a modern day Shakespearean drama unfolds in a frightening dystopia that is more present than present.

Inspired by Dante's Inferno, John Connors - Ireland’s sole breakout filmmaker from its ethnic minority Traveller community (Minceir), draws from real life to give a voice to the historic silencing of oppression and systematic clerical sexual abuse of generations of his clan. Graham Earley stars as Canto: a 30 year-old dealing drugs to pay bills while determined to prove himself a worthy family man. When his absentee father, Dan (Paul Roe), tries to re-enter his life, their histories are challenged as they face off in an unforgiving mirror of their marginalized realities – and survival.

From the heart of Tokyo’s iconic Shibuya District, comes the debut feature of Katsuki Kuroyanagi. In the dark depths of its well-oiled criminal underbelly, GOD (Kiyohiko Shibukawa), rules the streets. And when one of his killers screws up and is on the run, his cleanup crew gets behind the wheel to exact revenge. Set in the ward area known as a global hub for IT, and the Japanese capital of nightclubs and trends, Katsuki spent 7 years capturing a vein of its complex and criminal pulse. Life on the streets is a wild and ever-changing ride for survival. Lensed in black & white, with a budget of a mere $6,500 USD, Katsuki’s noir is a street pulse punk symphony dedicated to the people of all cites.

WAY OUT AHEAD OF US

In his debut feature, Rob Rice explores the personal and political economies of catastrophe and communion in America. Set in an impoverished small town in the desert, a man keeps his terminal illness a secret from his daughter so he doesn’t spoil her plans to move to the city of dreams – Los Angeles. Drawing from his own life, Rice elevates a portrait of a complex and invisible community to a testament of people forced to find ways to survive »in the face of the world’s most perverse and indifferent political economy: America.«

WE DON’T DANCE FOR NOTHING

»La Jetée« meets »La La Land« in the debut feature of Chinese-American filmmaker Stefanos Tai. A Photo Montage love letter to the Filipina Domestic Workers of Hong Kong, this visual recreation of true memories shared by this community of 400,000 women follows one woman's plan to run away and escape the oppression. Captured on Super-16 amidst the Hong Kong Protests, Tai blends stills with motion to underscore the entrapment felt by these marginalized women, and highlight their passionate release into freedom when they Street Dance each Sunday on their day off in a land far away from home.

OUR FATHER, THE DEVIL

In the debut feature of actress/filmmaker, Ellie Foumbi, the unspoken challenges faced by immigrants seeking a fresh start in a new land are explored in an indirect portrait of the fates of child warriors. Babetida Sadjo stars as Marie: an African refugee whose quiet existence in a sleepy mountain town in the south of France is upended by the arrival of a charismatic Catholic priest whom she recognizes as the warlord who slaughtered her family. Winner of the 2022 Audience Award in Tribeca, Foumbi offers haunting insight into hearts of darkness rarely unearthed, and the grace with which hell stands a chance.

In the debut feature of Tom Bewilogua, a refugee looks for a fresh start at a European multinational temp agency – but they have very different plans for him. In the spirit of such classics as »The Manchurian Candidate«, Subject 101 (the hero/protagonist), is but a pawn, and is thrown into a psychedelic Orwellian nightmare which unravels his dark past and a corporate complot against him. Desperate to understand how he became part of an inhumane experiment, he dives down a rabbit hole in order to uncover the truth and save his own life.

Indie Auteur, Mark Polish, returns to Oldenburg with his latest directorial offering: a cautionary tale that bleeds beyond technophobic horrors. »Murmur« is a groundbreaking new app being beta tested by a small group of tech-savvy teens and aspiring social media stars, fronted by Tiger (Logan Polish): part goth, part gamer, all badass. On her 18th birthday, Tiger’s vision is challenged by her peer, Buster, whose blind ambition unwittingly raises the stakes of the game to that of life and death. They hit the road to test the game in the wild. However, the seductive black box that captures, stores and even sells our most sacred memories can be truly terrifying. And deadly.

Ben needs good grades to earn a scholarship. His widowed mother Julie is unable to pay for his college tuition. In school, his physics teacher Mrs. Wheeler threatens to fail the entire class after she discovers that someone cheated on the midterm exam. To get rid of her, Ben and his best friend Tanner come up with a plan to accuse Mrs. Wheeler of the murder of a missing student. Screen legend Rita Moreno gives such a wildly energetic performance as the evil teacher that it’s hard to believe she just turned 90 years old.

Stills for the announced films are available at https://filmfest-oldenburg.de/en/press/press-material-films/