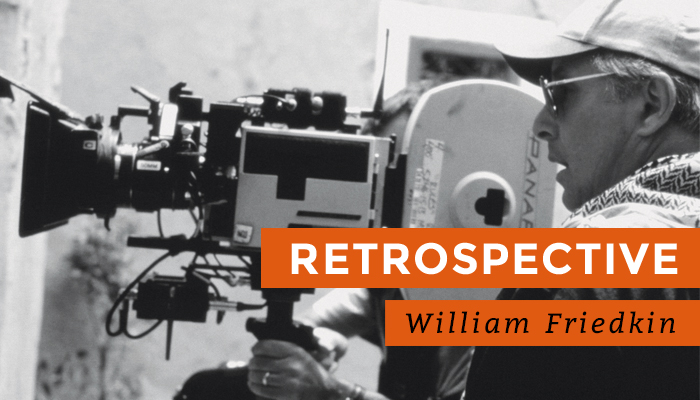 The iconic American filmmaker will be honored with a retrospective at the 27th Edition of the Oldenburg International Film Festival. The retrospective will be accompanied by the German premiere of Alexandre O. Philippe’s documentary „Leap of Faith“. William Friedkin will be in attendance in Oldenburg via virtual cinema, in a special highlight Q&A event which will be live worldwide for audiences.

Regarded as one of America's greatest directors, William Friedkin’s prescient works have run the gamut from independent and genre defining landmarks to blockbuster thrillers and Academy Award winning classics of cinema.

Starting out as a documentarian, the gritty harshness of “The People vs. Paul Crump” is considered one of the most powerful and thought provoking documentaries of the 60s and a hidden gem in the filmography of a man described as an auteur, provocateur, and genius.

Transitioning into feature films, it was 1971s “The French Connection” that secured his place as a legend of the New Hollywood movement that would change the landscape of American cinema forever. Nominated for 8 Oscars, the film won 5 Academy Awards – including Best Picture and Best Director.

His follow-up, 1973s “The Exorcist”, was nothing less than a revolution for the horror genre. Wildly controversial, and banned in the UK, this critical and commercial smash hit earned an astounding 10 Oscar nominations, won 2, and is to this day considered one the best horror films of all time.

Friedkin proved once again that he would spare neither trouble nor controversy to realize his cinematic vision with his next film, 1977s “Sorcerer”. Based on Georges Arnaud's novel Le salaire de la peur, which was also the basis for Henri-Georges Clouzot's 1953 film “The Wages of Fear”, it remains one of his most underseen films – and for many is considered his masterpiece.

Entering a new decade, the electric and frightening real “To Live and Die in L.A.” was layered with authenticity unmatched by his peers. Works over the next two decades solidified his esteemed reputation, and with his most recent offering, 2011s “Killer Joe”, Friedkin's fearless navigation of morally grey territory is masterful.

On the occasion of the 2020 Retrospective, the Oldenburg International Film Festival will also present the German premiere of “Leap of Faith: William Friedkin on The Exorcist” by award-winning documentarian Alexandre O. Philippe, which explores not only the genesis of “The Exorcist”, but also the spirtitual and mysterious forces that have informed the life and filmaking process of an icon of cinema.

William Friedkin will be in attendance in Oldenburg via virtual cinema, in a special highlight Q&A event, live for audiences.

The films of the Tribute to William Friedkin